We set out this day on our road trip across Southern Germany. As a reminder from my first blog post in this series- European Vacation 2016, our itinerary was as follows:

So on this morning, we were headed to Oberammergau. Oberammergau is a tiny Bavarian town that is world famous for its Passion Play. The Passion Play or Easter pageant, is a long standing tradition in the Christian church, across most denominations, especially in the Catholic church. Oberammergau performed its first Passion Play in 1634. According to tradition, the townspeople made a vow in 1633 that if the Lord would spare their town from the Bubonic Plague, they would perform the Passion Play forever thereafter. The death rate subsided so significantly (from  1 in 1000 to only 1 in less than a year), that the town took it as a sign that God had heard their prayers and staged the first play the next year. 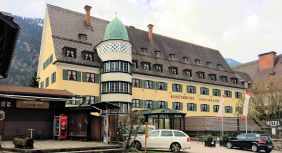 View from the Eis Cafe

Since this is an in between year– the last one was in 2010, and the next one will be in 2020, the town was very quiet. We had arrived in the morning, about 10 am, so we were the only people at the theater. Actually, as we drove through the quiet hamlet, it looked like we were the only people in the town, besides the residents. There were no people around. We decided to visit the Passion Play theater first. We watched a short movie about the history of the play, then walked down the hall to go to the amphitheater. Along the hall is a wall display that details the history of the Passion Play through 2010. Starting in 1680, the town decided to celebrate the 10 year intervals falling on years that end in zero. However, in addition to this schedule, the town also celebrated the 1934 performance for the 300th year anniversary [see first panel below] and again in 1984 for the 350th anniversary. This was in addition to the 1930 and 1980 performances. Besides these additional performances, the play was cancelled twice- once in 1920 due to WWI and 1940 due to WWII. The 1920 performance was moved to 1922. 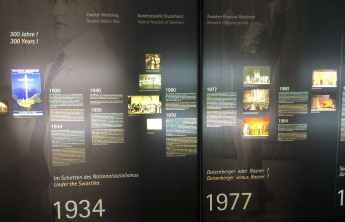 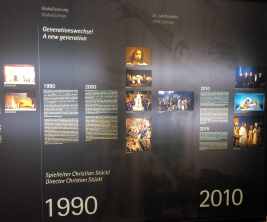 The 1934 performance was notable not only as a tricentennial year performance, but also because it was the year Hitler leveraged the event as a means of propaganda. After witnessing it, Hitler reportedly proclaimed, “Never has the menace of Jewry been so convincingly portrayed as in this presentation of what happened in the time of the Romans.” Just as he would later design the 1936 Olympics as a show piece of Aryan superiority, he wanted to capitalize on the famous Oberammergau Passion Play as a vehicle for his anti-Semitic views. After his visit, he had posters made up to promote the event with the slogan “Deutschland ruft dich!” (“Germany is calling you!”).

Due to its anti-Semitic overtones, there has been much pressure to change the Passion Play’s script over the years.  For most of the 20th century, a script written by Othmar Weis (1769-1843) was used for the play, though it was revised by his student  Joseph Alois Daisenberger (1799-1883).  Starting with the 1990 performance of the play, Christian Stückl and Otto Huber presented versions that were much less offensive to Jews and concerned Christians than earlier versions. 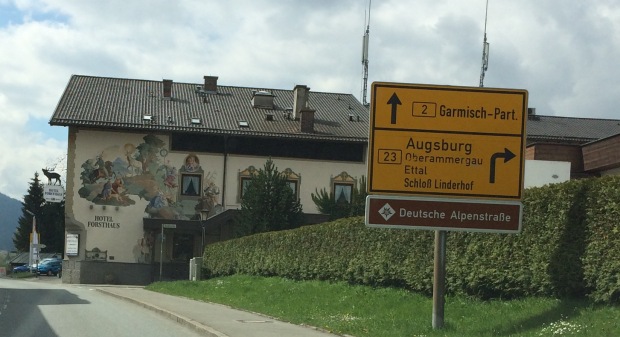 This concern is not unfounded, as over the centuries, the play has sparked many pogroms against European Jewish communities. Previous plays tended to ignore the fact that Jesus was in fact Jewish himself. The 2010 rendition sought to portray Jesus more realistically, as a practicing observant Jew.  Additionally, previous versions depicted the high priests costuming as having horns and vilified all Jews based on the events of Jesus’ last days on Earth. As the Council of Centers on Jewish-Christian Relations reminds us– Jews that cried out for His death were not representative of all Jews, but a section of the Jews in Jerusalem.

Most importantly, it was the sin of all mankind that brought Christ to the Cross. He was not a victim, He states multiple times that He came to die (John 10:11-18). This is the heart of the Gospel. Not hatred against Jews or any other group of people.

In 2015, the decision was made to hire Adbullah Kenan Karacas–a Muslim– to be second director for the upcoming 2020 Passion Play. Karacas, is a Turk who was born in Oberammergau. Karacas first performed in the play when he was eleven. He is a professional director in Hamburg. In 2010, a BBC reporter asked the then co-director, Otto Huber, if one of the town’s Turkish residents could ever be cast as Jesus. Otto said this could be a real possibility given the global appeal of the play. I think it’s an ironic question, because Jesus being portrayed by a Turk is casting that is more true to type, than the ridiculousness of a Teutonic German playing a Palestinian Jew. 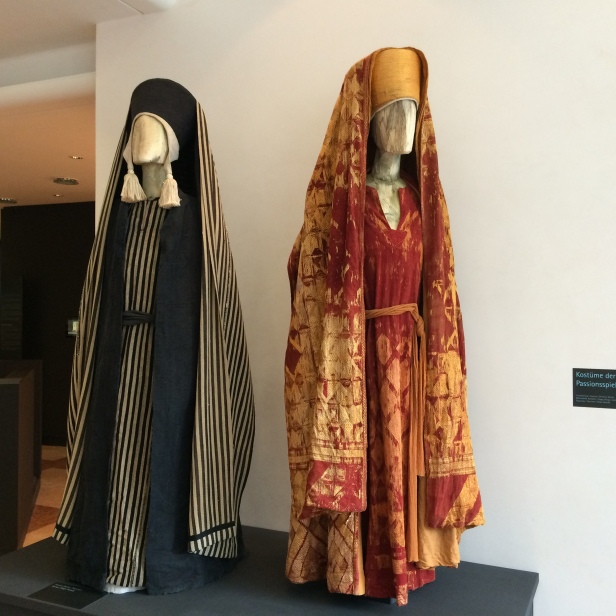 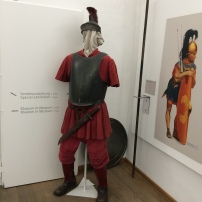 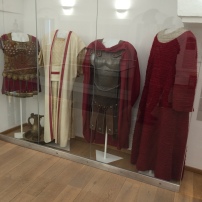 So what are the requirements to be cast in the famous play? Well, one must either: be a citizen of Oberammergau, or have resided there for 20 years or have married a villager (in which case, 10 years is the minimum residency). Even if a person meets these requirements, but leaves for a time, to go to college for example, they must reside in the town for at least a year before the play to take part in it. This brings up an odd fact– it has been discovered that the mortality rate of the town is affected by the play! People are so passionate (no pun intended) about being in the play that mortality rates drop in the years preceding the play and rise in the years following the play. Older residents often hold on for just one more chance to participate in their beloved play. 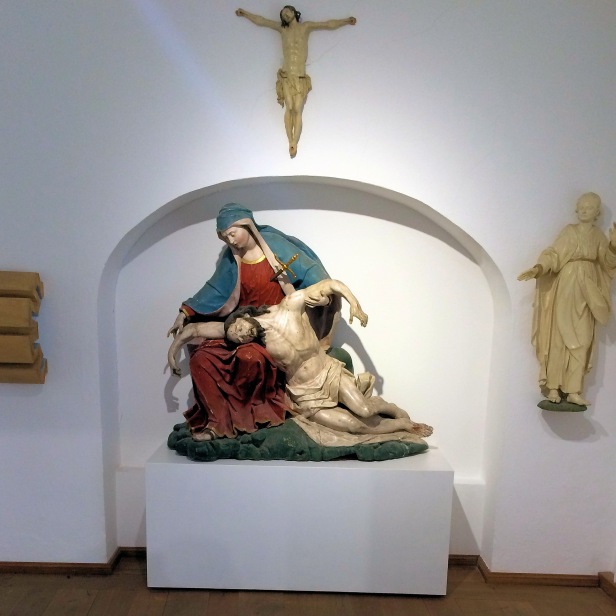 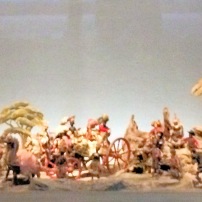 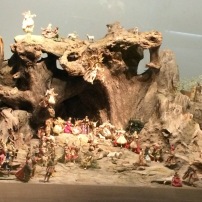 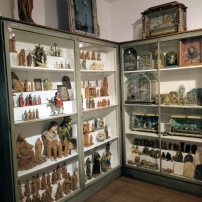 More than 2,000 performers, musicians and stage technicians will take part in the play, which means virtually every person in the town. The play brings in enough revenue to provide for all the town’s needs in the years between shows. The 2020 show will have 102 performances starting on May 16th, until October 4th– everyday except Mondays and Wednesdays. The play is 5 hours long, the first half begins at 2:30 pm, with a 3 hour break for dinner, then the second half starts at 8 pm. So, it makes for a long day and late night. Even though it is long and only in German, by all accounts, it is well worth it. 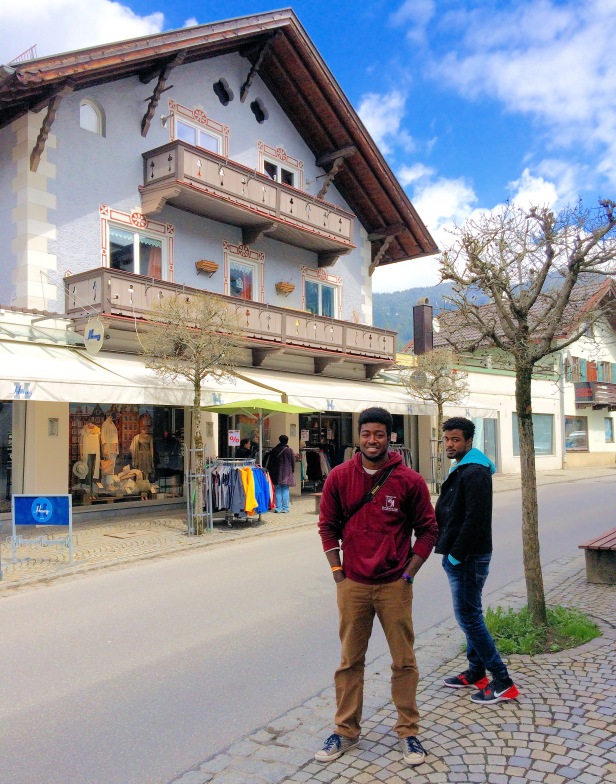 After seeing the amphitheater, we walked over to the Oberammergau Museum. It has an extensive collection of nativities, crucifixes, icons and costumes from the play.  Then  we just walked about the beautiful town enjoying all the frescoes on the exterior façades  of all the buildings. Each one  depicts a  biblical scene.  When we’re in Germany, we  love to eat ice cream, it’s not only delicious, I don’t have any issues with lactose intolerance with German ice cream. 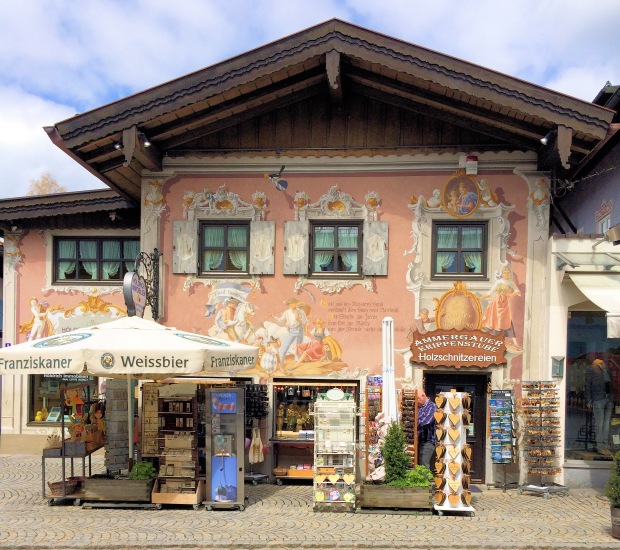 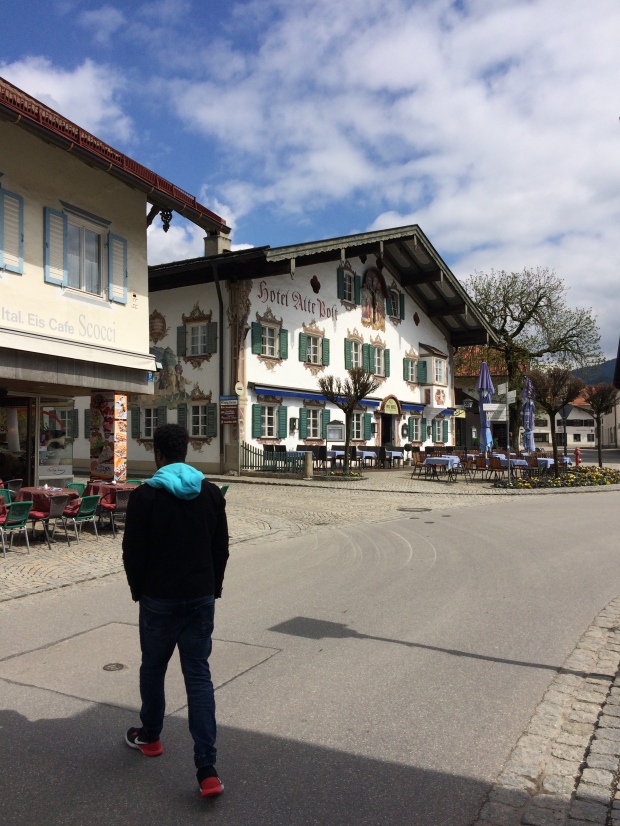 When I saw they had spaghettieis, I had to have some and introduce my guys to it. I had actually not had spaghettieis (pronounced spaghetti ais) when I was living in Berlin. One of my Brat friends, Rose H. wrote about it in a story she submitted for our book Cold War Memories: A Retrospective on Living in Berlin, and I had to write her back and ask what she was talking about. Since then, I had been meaning to get some and forgot when I was in Berlin again in 2014. When I was researching places to eat in Oberammergau before we came, I read that the Eis Cafe had 5 stars. We just happened to park right behind it without realizing it, and decided that’s where we would end our day after we finished sightseeing and shopping. Pictured above, Nathan is crossing the street to the “Ital. Eis Cafe Scocci.”

Okay, so what is Spaghettieis? It’s delicious, creamy ice cream that has been pushed through a potato ricer to resemble spaghetti noodles. Then, it’s topped with strawberry sauce to resemble tomato sauce and white chocolate shavings to resemble Parmesan cheese. I am a choco-holic so I ordered the chocolate version. It was SOOO good!

We wanted to get to Schwangau by lunchtime and it was almost an hour away, so after our sweet treat, we hit the road. I was going to blog about our trip to Schwangau and Neuschwanstein Castle (Cinderella Castle), but I think this post is long enough. So next blog entry will be about the second half of this day!

Next: A Day in Southern Bavaria- April 19th: Oberammergau and Schwangau (pt. 2)

5 thoughts on “A Day in Southern Bavaria- April 19th: Oberammergau and Schwangau (pt. 1)”