We arrived in Stuttgart late at night–it was to be a two and a half  hour trip, but the road we intended to take was closed for construction. We turned around and headed to Füssen via a slightly different route. We stopped at a Lidl to buy some snacks and drinks for the road and then stopped at the McDonald’s, which was about a block away, to get dinner. There was an African man working the cash register who was very excited to talk to us, because not only were we black, but he knew right away that we were American. He even threw some extra promotional McDonald’s items into our bag.

Since it was so late, the hotel desk clerk was gone. I was a bit concerned because in Germany, hotels don’t like late check-ins– whether you’re a few minutes late or several hours. There was a self-serve place to get your room keys, so Ivan was able to get us checked-in. Although I prefer pensions, apartments and B & Bs when in Europe, when Nathan joined our trip last minute, I had to change our accommodations. The only accomodations I was able to make in Stuttgart was a local hotel chain. This chain is called B & B Hotels. It had a double bed and two bunk beds, so it fit the bill for four adult travelers. True to its name, it also included a breakfast buffet, but it cost  €8.50, so we decided against it. Ivan is an early riser, so he just walked to Aldi which was close by. What I miss most about Aldi in the USA is it doesn’t have a bakery. Every grocery store in Germany has a bakery. 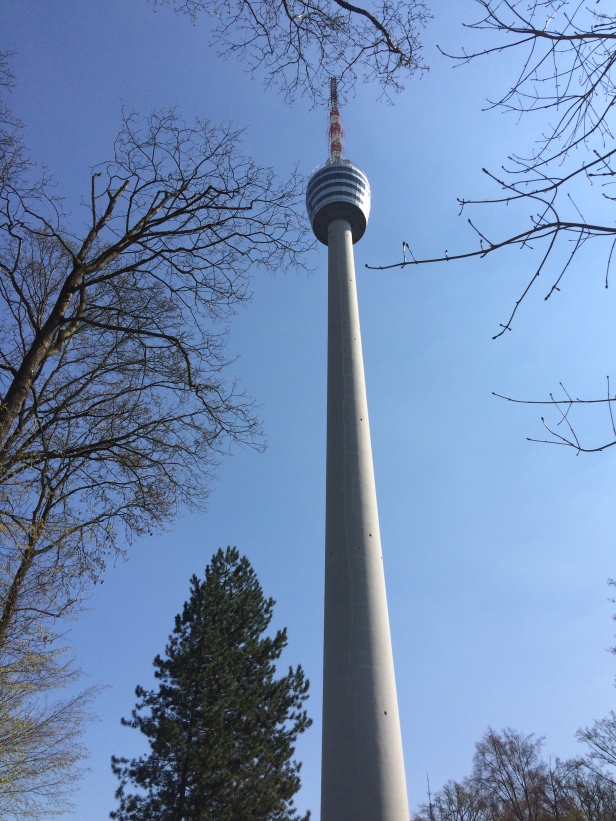 After breakfast, we went sightseeing. Christian was exhausted– he’d come from a semester long voyage with Semester At Sea, then spent the whole night out in London saying goodbye to friends, and hit the road running with us to Germany.  So, he stayed behind to catch up on sleep. I’d been wanting to see the Fernsehturm Stuttgart, so Ivan, Nathan and I went to see it. Although it’s not that big a deal now, when it was built, it was the first telecommunications tower in the world made of reinforced concrete. It was constructed in 1955 and was controversial because it cost 4.2 million Deutsche Marks. This was as compared to only 200,00 DM had the city built a simple radio tower.

I wanted to go up to the top to see the views, but Nathan didn’t feel comfortable with going up so high, so we just took a tour of the surrounding park and historical displays. We had stopped on our way to the Fernsehturm to take pictures from various lookout points and we enjoyed the vistas different lookout points on the way back to the hotel.

Stuttgart is a large, bustling city. Germany consists of 16 federal states. Stuttgart is the capital city of the state of  Baden-Württemberg , and the largest city in that state. With a population of over six hundred thousand, it is the sixth largest city in Germany.  Stuttgart has also been the home of US military bases since before the Cold War. This is one of the reasons I wanted to visit, because I had fond memories of my time as a military brat visiting Patch Barracks to compete in high school sports events. As the home of EUCOM (U.S. European Command), it was a favorite post for my friends and I to visit. High Command posts meant well stocked commissaries and PXs (Post Exchanges– military retail stores).  During the Cold War in Europe, many American foods were in limited supply, but the high command posts have a lot of officers and in any country, officers get the best provisions.

After we got back to the hotel, it was lunch time, so we got Christian and went downtown to find a place to eat. There was a lot of construction in the city center area as we were drove around looking for a place to park. We finally settled on a parking garage underneath the mall near Königstraße. 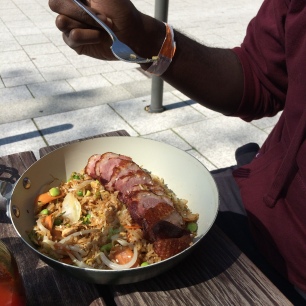 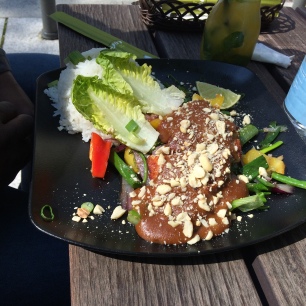 After parking, we walked around looking for a good restaurant. As Nathan prefers Asian cuisine, and the rest of us didn’t have a preference. After much walking and reading menus in restaurant windows, we settled on coa Wok & Bowls , an Asian fusion restaurant a block away from the famous and beautiful Schlossplatz. If you’ve read any of my blog posts about Berlin, or been to Berlin, you know there are a lot of platzes (city squares). Stuttgart’s largest platz or square is in the Mitte or the city’s central district.

The food at coa was very good. The waitress spoke perfect English, but we neglected to ask if she had grown up in the US. It definitely made ordering easier on us, as my German is sehr Schlecht. After our delicious lunch, we walked to Schlossplatz. The pictures we took did not do it justice, so here’s a link to some better views: Schlossplatz Stuttgart . On our way to the platz, we crossed over Königstraße, which borders Schlossplatz and is famous as Germany’s longest shopping district. 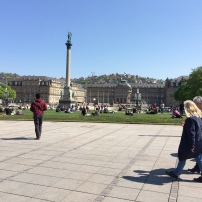 After taking in the view of imposing buildings, green expansive lawns and grandiose fountains, we headed north on Königstraße back to our car. It is a very expansive street, and there were so many shops. Unfortunately, I was with three men who were not that interested in shopping and were more focused on getting back to the room to rest. Since I had promised that I would not force an aggressive itinerary on Wednesday, we went back to the room and chilled for a few hours. 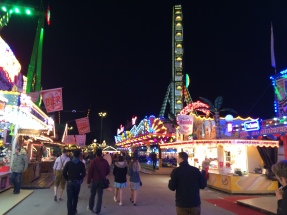 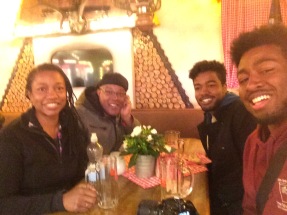 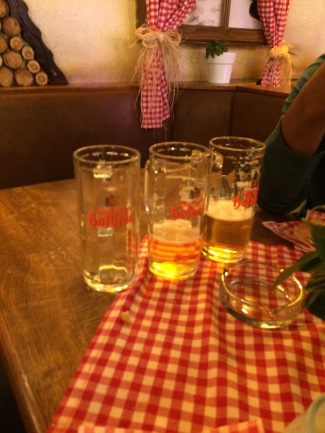 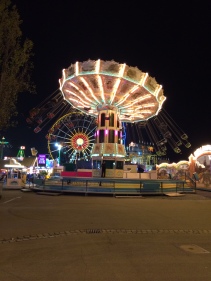 Our main reason for going to Stuttgart was to attend the Frülingsfest, so that evening we ventured to the fairgrounds. It was dark by the time we arrived–but just as in Munich, two days before–since it was a weeknight, there weren’t very many people there. We found a cute little Bavarian Village themed bierstube and enjoyed some good German bier and footlong brats! I don’t remember there being any footlong ones when I lived in Germany, but they sure were good!

After eating, we took a stroll around the fairgrounds. We were headed to France early the next morning, so we called it a night and headed back to the hotel.

Next Post: A Day in France: Strasbourg, Capital of the EU